You are here: Home / Infographics / Telecommuting Benefits Employers and Employees 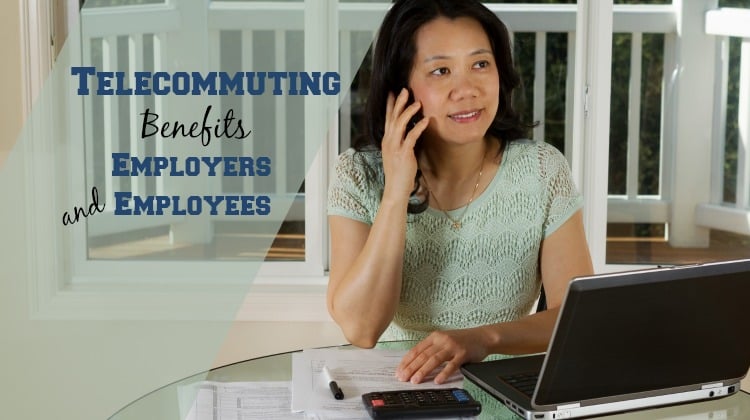 Did you know that telecommuting delivers tangible benefits to both employers and employees? It has been projected that the cost savings of telecommuting would be over $1 trillion per year in the United States if just half of employees with jobs that they could do from home worked remotely for just half the year.

According to the data in the infographic shown at the end of this article, 24 million Americans currently work from home, but that number is expected to nearly double by 2016 when 63 million will telecommute. It’s not surprising that telecommuting is on the rise given the real benefits it offers to employers and employees.

Working from home is still considered a job perk for 80% of employees, but it’s likely to become less of a perk and more of a requirement if employers want to attract and retain the best talent in the future. Research has found that two out of three of workers (66%) would work from their homes if they had the choice. In fact, if given the choice, more than one in three workers (36%) would choose working from home over a salary increase!

Telecommuting allows employees to work independently and feel more self-directed. It gives them freedom to do their jobs without the logistical and political obstacles that so often get in the way in offices and other traditional workplaces.

According to the infographic below, one of the biggest areas where employers see benefits from telecommuting is absenteeism, which costs U.S. companies $300 billion per year. Since telecommuters often continue to work even when they’re sick, these costs are reduced when more employees telecommute. They also tend to work longer hours overall. AT&T reports that its telecommuting workers work five more hours per day than the company’s non-telecommuting employees.

In addition to reduced absenteeism, telecommuting increases productivity for many companies. For example, American Express employees who work from home produce 43% more than the company’s office employees. Best Buy, Dow Chemical, and British telecom have all reported that telecommuting has increased its overall productivity by 35-40%.

But that’s not all. Telecommuting also means employees aren’t wasting time commuting to and from work, and for many telecommuters, that saved time becomes additional work time. Estimates show that 60% of the time telecommuters save by not commuting is transferred directly to performing work for their employers.

Ultimately, 60% of employers have reported that telecommuting delivers real results that directly affect the bottom-line. For example, Nortel and Dow Chemical save more than 30% on non-real estate costs, and in 2014, Dell saved over $12 million thanks to telecommuting.

The Wall Street Journal has reported that companies that allow employees to telecommute at least three times per month were actually more likely to report revenue increases of 10% or more within one year. Now, imagine how much higher that would go if they allowed telecommuting more than three times per month.

Telecommuting helps the employees, their families, companies, investors, and the environment. What’s holding so many companies back from giving employees more flexible work options?

Check out the infographic from Needa for more details.

You can read more about the telecommuting trends and related benefits in these articles from Women on Business: